Innovative and sustainable production at the Porsche Plant Leipzig

The new Porsche Panamera is setting new standards in production

Leipzig. Innovative joint technologies, multi-material mix and large-scale use of aluminium: The new body shop at the Porsche plant in Leipzig is one of the most modern and innovative facilities of its kind in the automotive industry. A total of 475 robots and some 200 employees per shift work here to produce the new generation of the Panamera based on the flexible Modular Standard Toolkit (MSB) with a vertical range of manufacture of more than 90 per cent. Body specialists employ the materials with the best properties for the job. For instance, the complete outer shell of the new Panamera is made exclusively of aluminium. “Overall, the body consists of 45 per cent aluminium. This high aluminium content requires an extremely high degree of competency in tool making and surface finishing”, explains Christoph Beerhalter, General Manager Body Shop Panamera at Porsche Leipzig.

Beside the high aluminium content, the production technologies are setting new standards. The body is made up of around 430 individual parts joined together using mechanical and thermal processes. These processes employ cutting-edge technologies. To give an example, the new Panamera has 50 per cent fewer weld points than the Macan. In return, a total of 600 flow-drill screws are fitted in each body produced. Flow-drill screws tap the threads required themselves and attach steel to aluminium in an optimal manner. Other processes used include punch riveting, aluminium laser beam welding and clinching. The latter, also referred to as joggling, attaches sheets of metal to each other by means of pressure. A further highlight in terms of joint technology is the use of roller hemming to connect the side walls to the body. “We combine roller hemming with a bonding procedure to form the positive connections between the lightweight aluminium side wall and the high-strength sheet metal used in the body structure”, says Beerhalter. Each vehicle contains more than 200 metres of bonding seams.

As well as being one of the world's most innovative production plants, the Porsche factory in Leipzig is also one of the most environmentally friendly. Sustainable use of resources played a key role in the recent expansion of the factory. The new body shop shuns the use of compressed air, instead employing energy-efficient joint technologies in a targeted manner. Photovoltaic panels installed on the roof of the body shop provide a considerable portion of the factory’s electricity requirements. The other factories are also designed in a sustainable manner. For instance, photovoltaic technology was installed in the Macan body shop back in 2013. In addition, modern cooling technology in the robot welding guns reduces energy consumption in the Macan body shop by more than 365,000 kWh per year. In the paint shop, a rock-flour filter system reduces energy consumption by 60 per cent in comparison with a water-based system.

Since the Panamera was launched on the market back in 2009, the vehicle bodies have been produced and painted in the Volkswagen factory in Hanover, before being transported to Leipzig for assembly. The new generation of the Panamera is now being produced from scratch in Leipzig. The site became a full-scale plant for the Porsche Macan back in 2013. Studies such as those conducted by market research company J. D. Power confirm the quality of the models produced in Leipzig. Following its market launch in 2014, the Macan immediately took the number one ranking in its segment in the J. D. Power ratings and maintained this top position in 2015. Porsche expanded its Leipzig plant for the fourth time to accommodate complete production of the Panamera. Costing around 500 million euro and taking just under two years to complete, the expansion saw the creation of new facilities including a new body shop with a production area of around 60,000 square metres. Porsche also created 600 additional jobs for the new generation of the Panamera. In total, the sportscar manufacturer has invested approximately 1.3 billion euro in the development of the Leipzig factory.
Communications, Sustainability and Politics
Corporate and Product Communications
Kristin Bergemann
Phone: +49 (0) 341 / 999 13450
E-mail: kristin.bergemann@porsche.de
Text

The new Porsche Panamera is setting new standards in production

Plant overview Porsche Leipzig from a height of 200 meter 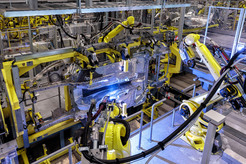 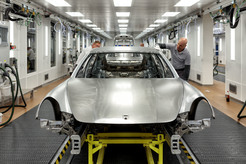