The pair of young Porsche Michelin Junior drivers battled for the Sprint Challenge title last year before stepping up to the Mobil Pro class of the Porsche PAYCE Carrera Cup Australia this season.

That battle has continued this weekend, locking out the front row in qualifying before dueling for the lead in both races.
Jones narrowly won the opening race over Love and Michael Almond, while Love returned serve in the second to even the score at one all heading into Sunday’s 45-minute mini-enduro decider. Porsche Centre Melbourne driver Nick McBride was fourth in each race.

Stephen Grove swept the Carrera Cup Pro-Am class in both races, beating home Tim Miles and Marc Cini in each sprint.
Ryan Suhle won the Sprint Challenge Mobil Pro class in both races with Christian Pancione and impressive rookie Courtney Prince third, while the Pro-Am class went to Andrew Goldie in each race; Matt Belford and David Grieg on the podium in race one, while Belford and Michael Loccisano filled the top three in the second race.

“It was classic Porsche Racing,” Jones said after winning race one outright aboard his Helimods McElrea Racing Porsche.
“Aaron put on a lot of pressure when we caught traffic half way through. I’m stoked to come away with the win.”
The two sprint race results set up a thrilling Porsche PAYCE and Michelin Cup feature race tomorrow, to be contested over 45-minutes in predicted warm conditions at the Victorian circuit.

“It was really hard racing and we banged doors a couple of times,” Love enthused of his race two battle with Jones for Mobil Pro class honors.
“Full credit to the team who gave me a really good car. It was a great battle and we’re really pleased to get that one.”
Jones led from start to finish in a competitive opening race, resisting late pressure from Aaron Love to take the first sprint of the weekend.

Starting from pole, Jones edged out a two-second margin early in the race before his Sonic Motor Racing rival closed as the field negotiated lapped traffic – the pair crossing the line separated by a car length. Love banked the fastest lap of the race, his 1m09.86s best sitting beneath the existing Carrera Cup lap record at Sandown.

Michael Almond was third, having earlier passed Nick McBride after an early scrap before setting out in pursuit of the leaders.
Old rivals Stephen Grove and Tim Miles were just as closely matched in the battle for the Carrera Cup Pro-Am class, the pair nose-to-tail throughout most of the 22-lap duration. Grove won by less than a second, with Marc Cini in third.

Andrew Goldie, having stepped up from contesting Class B in Sprint Challenge, won the Pro-Am class ahead of Matt Belford and David Grieg.
The intensity stepped up in the second race later in the afternoon: Jones and Love dueling for the lead and exchanging positions three times before the Sonic racer established himself as the clear leader.

Holding third early, Almond then closed on the leaders before he too slipped past Jones at turn one to make it a Sonic 1-2 result. The top three crossed the line nose-to-tail in a compelling battle that included three lead changes.

Suhle had a clear path to victory in Sprint Challenge Mobil Pro category, nipping at the heels of the Carrera Cup cars before settling into the groove for a comfortable victory. Pancione and Prince completed the top three.
Pressured all the way in the opening race, Grove had a more comfortable run to victory in race two – Miles and Cini again completing the podium.

West Aussie Andrew Goldie went two-for-two in Sprint Challenge ProAm, taking the race two win after early pressure from Ross McGregor. A mistake dropped the experienced Sprint Challenge regular back behind Belford and Michael Loccisano by the end of the race.

Both sprint races were run without Safety Car interruption and with competitive racing throughout the field.
The final race of the Porsche PAYCE and Michelin Cup will see the 18-strong grid tackle a 45-minute feature race to conclude the weekend – appropriately to be run nine months to the day following the premature end of the 2020 Carrera Cup season in March this year.

STANDINGS
Porsche PAYCE and Michelin Cup – After 2 of 3 races. 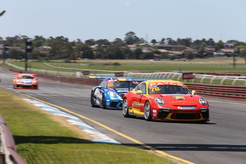 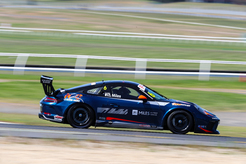 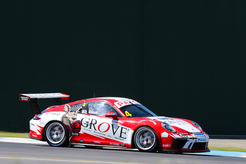 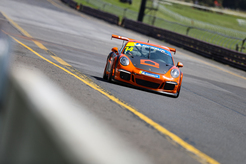 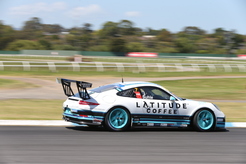 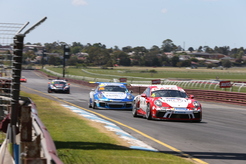