Production to restart in Zuffenhausen and Leipzig

Stuttgart/Australia. As from next Monday (4 May), Porsche is restarting production on a site and task-specific basis. All the required measures have been taken in advance to guarantee the maximum possible safety for employees and so that production can be increased in stages up to full capacity.

As production is ramped up at the main factory in Zuffenhausen and at the site in Leipzig, all employees will now resume work step by step. The adapted processes in production, logistics and procurement have been agreed with the Works Council and the Health Management department. The requirements of the respective authorities will also be observed.

“The restart is an important signal – for our employees as well as for our customers," said Albrecht Reimold, Member of the Executive Board for Production and Logistics at Porsche AG.

"We have monitored and analysed the situation very carefully right from the start and flexibly adapted processes. Now is the right time to look forward with optimism and to resume work – subject to special precautions.”

A comprehensive catalogue of measures has been decided for the Porsche factories in Zuffenhausen and Leipzig (both in Germany). In addition to giving paramount importance to ensuring protection for employees, these measures are designed to permit the resumption of orderly and efficient production as quickly as possible. For example, production employees are required to observe a minimum distance of 1.5 metres, follow basic rules of conduct or to work with a face mask in defined areas.

Medical institutions and medical personnel have absolute priority for Porsche when it comes to equipment with protective clothing. The company is therefore organising equipment as part of the 'Porsche Helps' initiative and is also donating money to hospitals as well as food to food banks; the budget for donations has been increased by five million euros.

“It will take a great deal of effort to get the economic and social system moving again. Everyone must make a contribution to this,” said Oliver Blume, Chairman of the Executive Board of Porsche AG.

“It is important to have a positive fundamental attitude. Every crisis also offers opportunities. And we want to make the most of them.”

The company initially stopped production in its two factories on 21 March 2020 for a period of two weeks and announced that it would continuously reassess the situation. Due to bottlenecks in global supply chains, the factories have remained closed for a total of six weeks because orderly production was not possible.

In addition to suspending production, Porsche AG also decided at the time to implement a number of other stricter measures. These will remain in force until further notice to relieve the burden on the infrastructure at the sites. This means that the greatly increased level of 'mobile working' will continue in the indirect areas, and meetings will be held as video or telephone conferences. The ban on business travel also continues to apply. 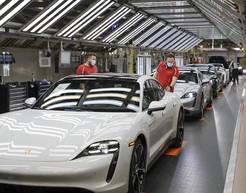 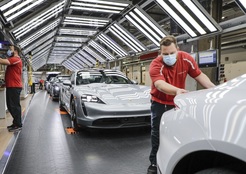