Infographic series: The start of a new era in motorsport

Porsche presents its “Road to Formula E” as an animation

In just a few days, the TAG Heuer Porsche Formula E Team will enter its maiden season. At the Diriyah E-Prix, the squad will contest the first two races of the 2019/2020 ABB FIA Formula E Championship in Saudi Arabia on 22 and 23 November 2019. This sees the works team end its “Road to Formula E”. Porsche has summarised the journey to the destination – from the official announcement of the Formula E entry to the first two races – in an infographic series. The animation, lasting around two minutes, follows the Formula E project in detail and is now available in the Newsroom.

Fritz Enzinger (Vice President Porsche Motorsport and Group Motorsport Volkswagen AG): “It’s finally time: the TAG Heuer Porsche Formula E Team enters its maiden season of the first fully electric street racing series in the world. We have focussed a great deal of attention on preparing for this moment over the past one and a half years, have driven the Porsche Formula E project together and thereby made a mark in pioneering motorsport activities. In no other race series are there as many manufacturers represented as in Formula E. Therefore, we are expecting the competition to be tough and the races to be super exciting for our fans. As a team, we are well prepared and are optimistic heading into our maiden season, in which we will have a lot to learn.”

Porsche presents its "Road to Formula E" as an animation 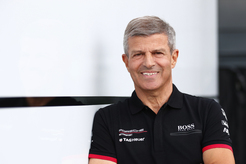